We want a world free from single-use toxic plastics for everyone, everywhere by 2030!

Sign and share our #TaxPlasticPolluters Campaign to call for a tax on single-use plastic producers and demand that they cut the amount they produce and sell by half by 2025.

Alternatively, find us at Glastonbury Festival 2019!

Have you got the bottle for Shambala?

Raw Foundation has teamed up with Shambala Festival and Frank Water to produce a reusable, 100% 750ml stainless steel water bottle.

At this year’s Shambala Festival, Raw Foundation has teamed up with Shambala and Frank Water to reduce the amount of single-use plastic used and brought onto the festival site.

As part of their campaign, Raw Foundation is ‘Making Waves’ again at this year’s Shambala festival to create a hullabaloo about the true extent of plastic pollution and its impacts! A dynamic art exhibition and jam-packed timetable of activities and workshops for kids and adults will provide an opportunity to connect festival-goers to this critical global issue.

We hope to raise awareness, inspire action and creative rebellion to reduce plastic consumption. So, if you are a festival-goer interested in a plastic free future (or indeed keen to reduce festival waste) join us and GET INVOLVED!

As part of the campaign with Raw Foundation to encourage event and festival organisers to reduce plastics at their events, Shambala are leading the way to reduce the amount of single-use plastic on site and encourage Festival-goers to bring their own reusable water bottles or buy a stainless steel bottle instead of buying bottled water.

They cause an enormous amount of needless waste, especially as the Festival provides free tap water across the site. You can fill your bottle for free at any of their drinking water taps.

Every piece of plastic ever made still exists somewhere and the effects these types of plastics have on the environment are huge – with an estimated 150 million tonnes of plastic currently littering our earth and oceans.

We hope you’ll join us, to help make Shambala 2014 as plastic-free as possible – and save yourself a few quid on bottled water in the process!

As well as filling your water bottle from any of the drinking water taps on site, you will be able to pick up a reusable bottle and refill it for free with unlimited chilled water from one of their fixed refill stations or mobile units.

Here, you can also learn more about the charity’s incredible work to provide clean water in rural India.

They will also be reminding festival-goers how lucky we are to have taps and safe water sources in the UK – so rather than buying plastic bottles that will ruin the site, buy a reusable bottle and drink fresh tap water all festival!

For more information about the work of Frank Water, visit www.frankwater.com

Raw Foundation will be raising awareness about the hidden consequences of plastic pollution and its impacts and focusing on simple solutions which we hope will change thinking and behaviour about plastic.

Our Plastic-Free Festival-Goers Guide will cover everything from the stark reality about plastics to festival-specific advice and tips. The guide aims to give individuals a single source reference to the things they also need to take into consideration to reduce their plastic footprint in a wider context, but without being prescriptive.

We’re hoping to encourage people to avoid single use plastics, carry a reusable bottle with them, and not rely on buying plastic water bottles each time they want to drink!

Come and find us at the festival and sign our petition, to amplify the ‘message’ for whole sector change and call on world leaders to put an end to single use toxic plastics.

We’ll use every signature we collect at Shambala to make sure world leaders Make Waves about hazardous (or toxic) plastics at the UN General Assembly, and prove that a world free from single use plastic for everyone, everywhere by 2030 isn't just a pipe dream!

For those of you who don’t yet have a reusable water bottle, our reusable 100% stainless steel 750 ml water bottles are priced at £10 and are a not-for-profit initiative.

You can purchase a bottle during the festival from the Frank Water stand on site.

x
1
Prev
Next
Go Back

My plastic journey from Source to Solution

I set up RAW Foundation over a decade ago with one goal in mind – to rid the world of pointless plastic. My work has taken me all around Africa to investigate plastic pollution and I’ve recently returned from a four-month expedition around South America.

I expected to find a lot of plastic on my journey, but I remain shocked by the sheer ubiquity of plastic pollution from global brands, even in the most remote places.

That’s why I’ve now set up the #TaxPlasticPolluters Campaign aimed at multinational companies. Despite what I’ve seen, I still hold a deep belief that a better world is possible.

Leading a world first expedition, I set off in November last year with a small team to circumnavigate and track the world’s plastic footprint across South America. Three years on from a similar study from Cairo to Cape Town in Africa, the purpose was to shine a spotlight on the sheer scale and transboundary nature of pointless plastic pollution.

What types and quantities of plastic waste were there? Where did they originate? What were the impacts? What is being done about it? And what are the solutions?

Over the course of four months, we travelled over 17,000km clockwise from Salvador in Brazil through Argentina, Patagonia, Chile and Bolivia to Lima in Peru – and finally the length of the Amazon from Iquitos to Macapa and Belem – bush-camping and sleeping in riverboat hammocks most of the way.

From the rubbish tips of Rio de Janeiro, Buenos Aries, and Ushuaia (at the end of the world) to Santiago, La Paz, Cusco and Lima – to fly-tipping and the rivers of plastic in the waterless Atacama Desert – to the world’s largest salt flats at Uyuni, the sacred waters of Lake Titicaca and the mighty Amazon River, the scale of mismanaged plastic debris, pollution and the proliferation of western brands was staggering.

The one simple question that faced us was – whose mismanaged waste is it really and who is ultimately responsible for it? 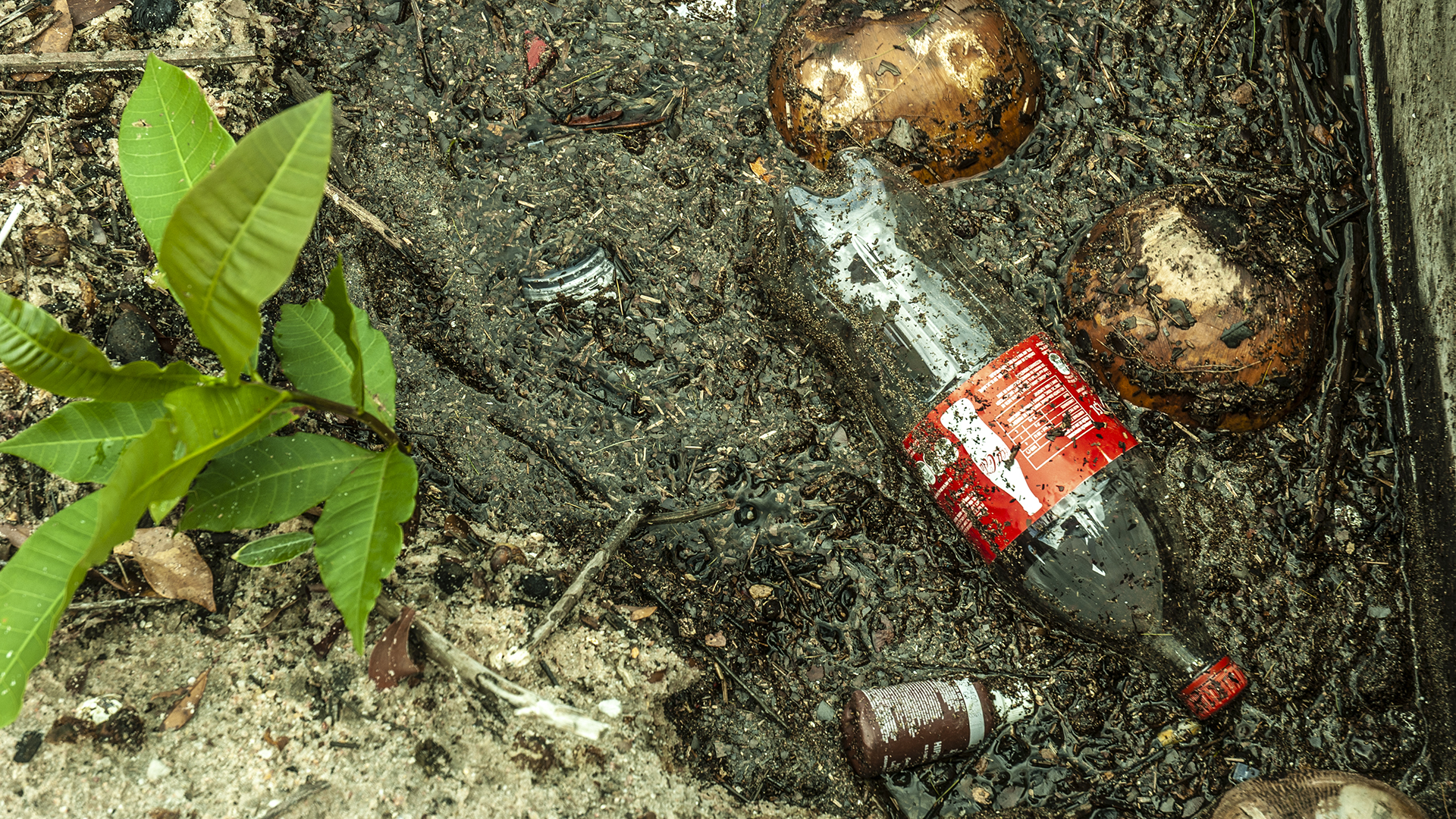 Clearly visible in this tsunami of disposable plastic – the items, logos and images of these multinational consumer brands – show where the responsibility lies. Along with many others, plastic waste from Coca Cola and Nestlé – two of the world’s top-three plastic polluters – turned up in our samples virtually everywhere.

These brands, with their throwaway packaging, are responsible for promoting and perpetuating a modern throwaway culture. Their mass production drives overconsumption across the world – which in turn is overwhelming communities and our planet with pointless plastic pollution.

The dangerous and depressing job of tracking plastic waste

Every 100km, we recorded samples of rubbish within a 1m quadrant, next to the road, track or river. The data we collected was so detailed that we have been able to identify the extent of the impact of individual items and global brands which collectively form the world’s plastic waste.

In some respects, our results were not surprising in that the Amazon is thought to carry around 60,000 tons of plastic trash every year into the Atlantic. What was alarming, was the extent of plastic pollution throughout the Amazon Basin – everywhere we went the myth of a pristine Amazon rainforest was well and truly busted.

The poorest are paying the price of our plastic love affair

Our use of plastic in the West is affecting communities in the most remote areas of the Amazon – they don’t want it and, worst of all, they have no way of getting rid of it. Having never relied on plastics traditionally, these communities are struggling with the ever-growing volumes of plastic waste and polluted water.

Of equal concern, inadequate water treatment means they are now reduced to buying bottled water themselves. While I find that idea deeply disturbing, I am sorry to say I don’t find it surprising. 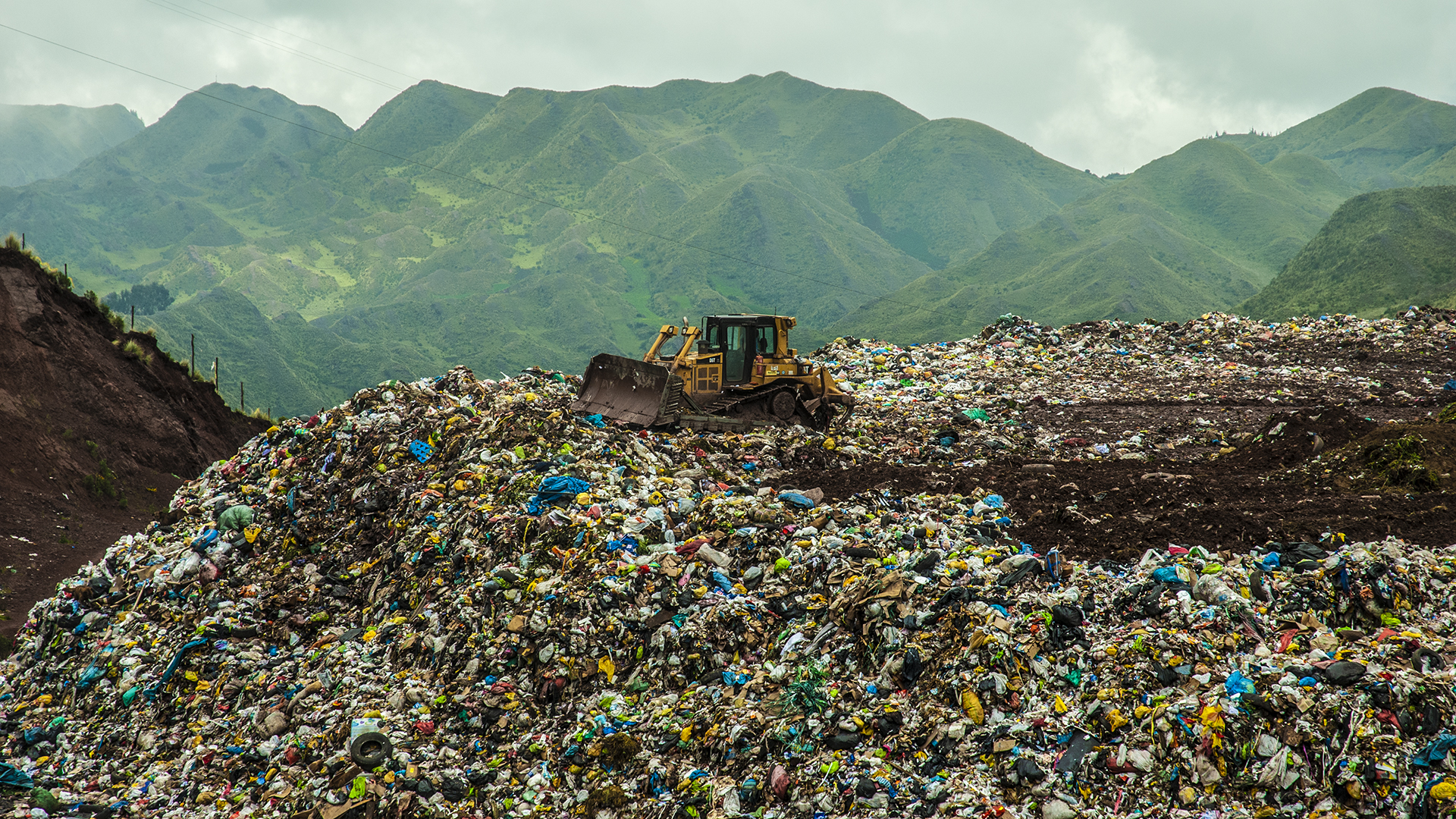 And it doesn’t stop there. The appalling practice of waste trade between industrialised developed and developing economies is exacerbating this disproportionately.

The inconvenient truth we have to face is that ‘convenience’ has an unacceptable cost. The situation is out of control – the poorest people and the ecosystems on which we all depend are paying the price.

Although the collective and individual efforts to collect and recycle single-use pointless plastic and packaging is worthy, this is not a solution and never will be. The fact is that recycling alone will never be sufficient to address the rising scale of the problem.

Since we began our love affair with this ubiquitous material in the 1950s, a staggering 91% of the plastic waste ever discarded has either been incinerated, openly burnt, ended up in landfills, dumps, the oceans or the natural environment. Only 9% has been recycled globally. [1]

The proliferation of single-use plastics has to STOP

We need to put the brakes on right now. As the major source of the crisis, the time has come to firmly place the responsibility where it truly lies – with the corporations and plastics producers.

They must now go beyond pledges to improve recycling and commit to massively reduce and phase out the amount of single-use plastic and packaging they produce and sell by half by 2025.

This will mean an end to business models which rely on disposable products and one-way packaging, and the start of a new paradigm. One that will allow the co-creation of alternative delivery systems – which typically have reuse and refill at their heart.

My manifesto for change

My travels have made it clear to me that action needs to be taken on every level: the plastic producers, the government, and us – the consumers.

This is why I have set out a manifesto for change, starting with the #TaxPlasticPolluters petition aimed at multinational corporations. We need you to add your voice and urge government to act. 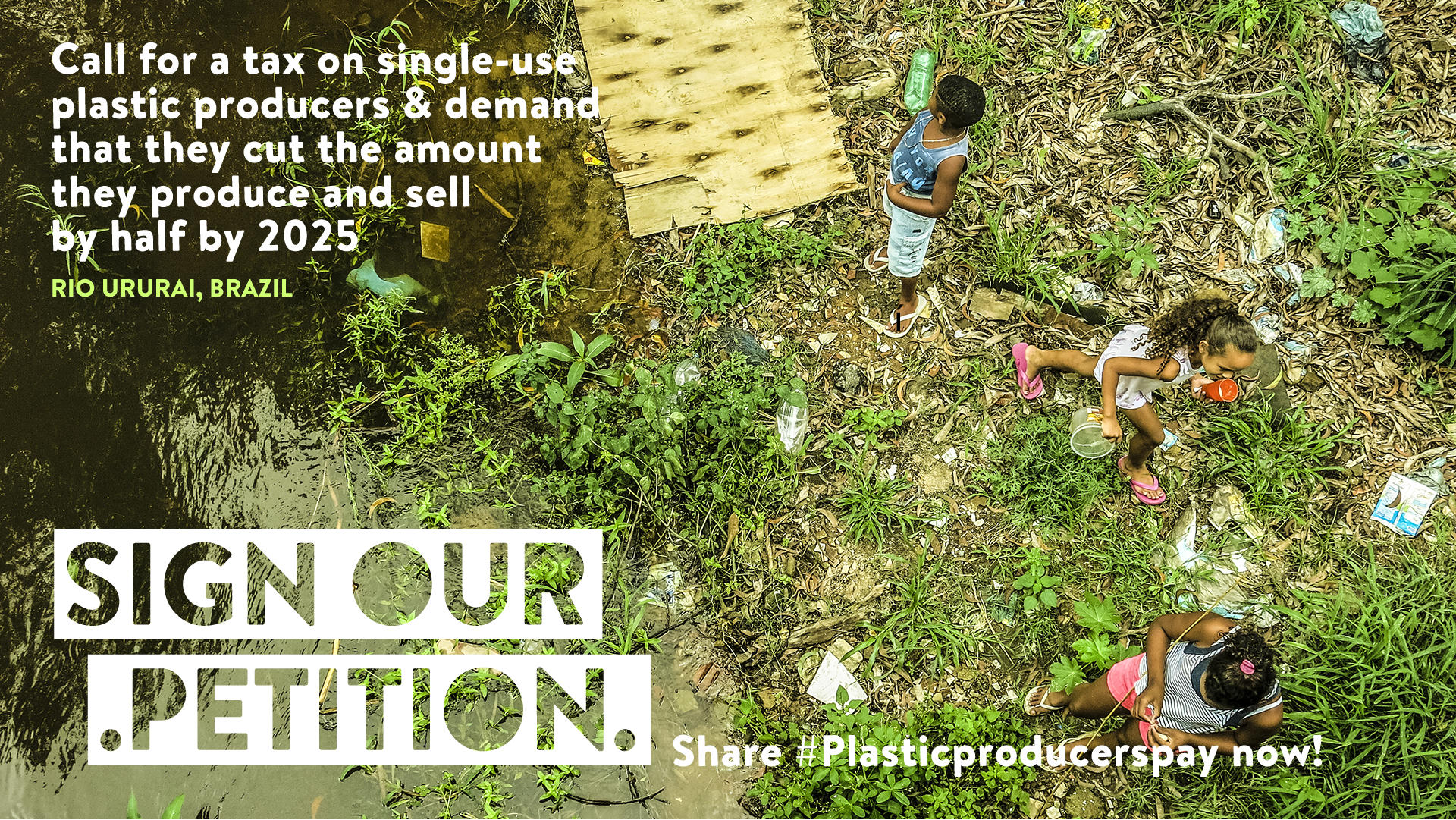 – Reduce that amount by half, country by country, by 2025

– Work in partnership with organisations and waste pickers to establish collection and recycling systems, create safe jobs and restore dignity

– Reimagine, innovate and explore business models that won’t harm people, the earth or the ocean.

The actions I’m urging all governments to take:

– Ban and phase-out all single-use plastics by 2025

– Ensure that export of domestic waste is minimised and where residual plastic waste is exported, that appropriate recycling facilities are in place in receiving countries by 2022

– Phase out the use of fossil fuel subsidies, including fiscal support and public finance, which help drive the production of virgin plastic

– Work in partnership with organisations and waste pickers to establish collection and recycling systems, create safe jobs and restore dignity

– Reimagine, innovate and explore business models that won’t harm people, the earth or the ocean.

– First and foremost, sign and share our #TaxPlasticPolluters campaign to call for a tax on single-use plastic producers and demand that they cut the amount they produce and sell by half by 2025

– Choosing ethical companies who are committed to reducing plastic use

– Write to elected representatives (in the UK via writetothem.com) about plastic waste concerns and ask them to take action.

[2] The government’s proposed definition of single-use plastics is ‘all products that are made wholly or partly of plastic and are typically intended to be used just once and/or for a short period of time before being disposed of.’ HM Treasury (2018) Tackling the plastics problem summary of responses to the call for evidence. https://assets.publishing.service.gov.uk/government/uploads/system/uploads/attachment_data/file/734837/Plastics_call_for_evidence_summary_of_responses_web.pdf